We are partnering with the City of Lawton to help spread the word about the 2020 Census! The Census allows for billions of dollars to be dispersed in federal funds to local communities based upon the need. Each Census intake carries nearly 5K of funding to reinvest back into the community and programs. Amongst the programs impacted are education, highway construction, healthcare, and many more. Complete your Census today and be counted! 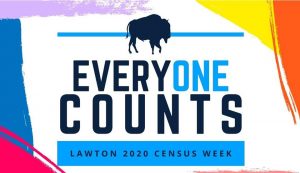 During this week, there will be multiple community stations set up for in-person Census taking! After completing the Census, individuals can enter a drawing for a chance to win prizes. Prizes include grocery cards, gift cards, gas cards, gift baskets, a flat screen and more! For the full listing of participating locations, please click here.

Our Owner & Principal Publicist Brandi Sims took the driver’s seat of Coffee With Fosh for a special edition write-up on its founder, Jamey Foshee! Read the write-up below:

This story starts out like many others you may have heard or seen on the silver screen. Boy grows up in a loving, supportive family reminiscent of Leave It To Beaver with both parents in the home and older brother serving as the occasional antagonist to our narrator. Jamey Foshee’s story begins in the small town of Spearman, Texas, and for those of you who are unaware, is in the Texas Panhandle. With a well-known City Manager father and mother serving as a traditional homemaker, Jamey’s early memories sound like the picturesque vision of a supportive, all-American conservative family right out of an old Sears catalog.

But like many stories, these picturesque views and memories are part of a multitude of layers in our lives filled with happy moments and gut-wrenching experiences that help to shape who we are. Following a mishap and shift in his father’s career, the family shifted from prominence to outcast which resulted in a move to a new town, creating lasting effects on the family’s youngest. The move in many ways, described by Jamey, took a hit on his overall self-confidence. The climb to popularity at an early age was met with a swift fall, resulting in abuse and bullying from his peers. Being the underdog in many cases will be an enduring and lasting instance that occurs throughout telling his life story. One bully stood out in sharing his experiences with me. His name was Buddy and in detailing who he was, it reminded me of the classic illustrations of a classroom bully. A bulky, domineering presence that plagued the schoolyard and he made it a point to make the small-statured Jamey know it. One story he shared quite vividly depicted the final straw of the constant harassment. While sitting at his desk, Buddy thumps his head to rile him and in a quick draw, Fosh took his best shot at the classroom bully. Shook? Yes. Defeated? Unfortunately, no. Our hero in this story took a punch to the chest that sent him flying across the classroom to the sound of ooh and aahs. Surprisingly, this was the last incident with the bully and unlike most guys fights, did not result in a burgeoning friendship, but rather a mutual respect and boundary setting.

What speaks to Fosh’s character is that despite his circumstances, he still finds ways to show grace and forgiveness. Later, the bully experienced a death in his family, and in a small town, the word traveled fast. Instead of backing off or simply ignoring the upcoming funeral, Jamey decided to attend to the surprise of his classroom bully. Not by obligation because frankly who could blame him for not, but simply Fosh’s spirit and character drove him to attend purely to support. It wasn’t unnoticed and his bully made sure to let his “so-called” friends know that that kid was the only one that showed up for him even after he teased him. The rest, I guess, is history.

Years later, as an adult, the emotional scars from the bullying and teasing took a hit to Jamey’s confidence. Some of which was able to be regained after he entered college at West Texas State University. As he described, “I went from walking with my head low to walking with my head high”. Meeting his first wife, having a child, developing his leadership style as a minister, and stepping into who he thought he was meant to be. Remember this is life and some stories aren’t as “cookie-cutter” as you would hope or expect. Marrying early had its challenges and the couple grew apart which resulted in a strained relationship and ultimately led to divorce.

Support came from the least expected areas. As a minister going through a divorce, the backlash was swift and clear. The one person Jamey described would not ever support any of his views and had taken the time to reach out were his close friends did not. ‘We all make mistakes, I’m here if you need me” with a warm hug and embrace. Similar to the Buddy story, the antagonist of his story in a turn of events became his supporter. It’s no wonder his views, political, religious, etc., radically changed.

This is the start of another important chapter of his life to note.  These, again, are those experiences that shake you to the core and shape who you are. Years following the divorce, the relationship strained further, most of which was fueled by anger, hurt, and immaturity. The impact trickled down to his relationship with his son which led to estrangement for nearly 13 years. When his son was in his early teens, Jamey made the difficult decision to allow his ex-wife’s new husband to adopt their only son. Selfless, honorable are the words that come to mind in having to make the difficult decision to “release” a child. I was shocked. Not only how vividly Fosh described that day signing on the dotted line, walking up to the Judge whom he knew, completely and utterly heartbroken. Here is another instance where Fosh’s character comes into play. As he wrote the final letter to his son, he didn’t use that opportunity to bash or humiliate, but simply take accountability for his part in the failed marriage and subsequent years after. It was one of the ultimate sacrifices that a parent makes, to selflessly make the decision to give your child away for a better life and stability. Those emotional scars are still there.

Since then, that boy became a man with his own spouse and small child navigating the world on his own. Our childhood trauma has a way of resurfacing in other areas in our lives and this story is no different. Since then, after a long conversation involving some alcohol and ground rules for no cursing or yelling to hear each other out, the shell of bitterness and resentment was cracked wide open and unleashed the hurt buried so deep by anger and confusion.  A reconciliation took place. The thing about truth is, it’s not the glamorous or adventurous stories that we hear. It is the raw, uncut, and unfiltered parts that make us human. Hearing the truths turned bitterness to bittersweet moments of regret.

After years of battling the weight of the decision and struggling with some depression, a glimmer of hope appeared in the form of the love of his life, Lisa. In a candid recollection, Jamey describes their first date as a very quirky, new, and fresh take compared to his past relationships. Unlike the others, this relationship challenged both to live their best life, freely and openly without taking away the unique qualities that made each of them special. For that reason, this great love has continued to grow for the past sixteen years. With two children of their own, they added three beautiful foster children, and they were to apply that love and extend to those that needed it as well.

Now, Mr. Foshee applies that method to addressing challenges in our current climate. Whether he is sharing the importance of wearing a mask as he currently battles cancer or opening the floor for the discussion on privilege and systemic oppression, his platform is undeniable and thought-provoking. These discussions didn’t start on social media, but rather, at home with his family members and challenging the views he’d grown to know as potentially ignorant to others’ life experiences. To understand how to address these tough topics, he had to step outside of his traditional upbringing and view life from the perspective of a disadvantaged person. Recalling the feelings of hopelessness, frustration being bullied as a child made him advocate and voice for the voiceless and “little guy”. One important thing to note is that although you may have never experienced racism or discrimination, the common ground is allowing others to share their experiences and being supportive of making changes that stop these forms of abuse.